"You know, Dr. Baumann," he broke the silence. "It's entirely your own fault that nothing ever became of you."

I didn't know whether I was supposed to be offended. That was in 2015.

It had been exactly seven years since I last visited my alma mater. A lot had happened since then -- a nasty divorce, nastier court battles, a new love, a new job, a new, a happy marriage, a new home. And because the University of British Columbia was so far away now, in space and in time, I thought I really should take the opportunity to walk down memory lane.

And so, I found myself standing in front of the redbrick townhouse that my two daughters called their first home. It wasn't a true redbrick, of course, just a redbrick first floor and aluminium sidings above that. The house still looked inviting, and so did the playground in front of it, and so did the whole neighbourhood.

I remembered Tim -- good-natured, well-tempered Tim -- climbing up the little red treehouse asking some eight-year-old boy if he had gone "fucking insane" for trying to push his daughter off the platform. And I remembered the hammer murder in the nearby forest that had happened just a few weeks after we moved in and that caused me a couple of nights of bad sleep, until they found out that it had not been a random attack. And I remembered the manhole cover, a two-foot by three-foot serrated steel plate, that was the principal offender of Phoebe's Summer of Bloody Knees. Yes, it was still there.

I walked a few blocks south, past the place where we lived when I was a Schrödinger Fellow, to the field where Maia had learned to ride her bike. The field was gone now, replaced by a new, a pretty school building, and so was the lonely tree that stood in the middle of the field. It was the tree Maia inevitably crashed into every time she tried so hard not to. Like a marble in a funnel, round and round, until ... well.

I continued around Osoyoos Crescent where buildings were being demolished by heavy equipment. It was high time. Those shabby buildings used to be rented mostly to graduate students from China and the Middle East. This was not the only injustice they had to suffer. But I was sure nothing had changed or would ever change.

Across Wesbrook Mall I saw the rugby fields where we had flown kites and where one day the cheap red kite with the Home Hardware logo had taken the whole string and was flying so high that I had to sit down because of a feeling of vertigo. I traced back a few blocks to visit the Commonsblock where students held their semesterly communal garage sale, "the garbage sale", as I called it.

Back past the old townhouse, past the apartment we rented when I worked in the Psych department, through the Village, past the bookstore. North on East Mall, left at the Law School, and left again on Main Mall. I remembered my first jog around campus in August 1993 and the pride I felt being a student at another venerable university. Michael Smith's Nobel Prize was only two months away.

I stopped at the BioSciences building and tried to find a way down into the old Oceanography department. In vain as it turned out. The space had been appropriated by microbiology labs, and the main entrance was locked and secured by a swipe card reader. I tried the back entrance, then the hidden side entrance, but to no avail. Oh, well.

If not the old Oceanography department, then maybe the old Fisheries Centre huts. But they were gone too.

To be sure, the old huts were terrible, one step below tarpaper army barracks and one step above an abandoned mining camp in the North. Rotting wood underneath reddish-brown paint, ramshackle offices with single pane sliding windows, the smell of mildew in the hallways, brown stains like contour maps on the ceiling tiles from past leaks, every step on the linoleum floors a worry that at last you might break through.

But as I stood there in front of the oversized glass-and-concrete monstrosity that was the Biodiversity Museum, I missed those old shoddy huts, missed the simpler times, really missed the professors -- Carl Walters, Charley Krebs, Tony Sinclair, Dennis Chitty, .... I missed their voices of wisdom in the windowless lecture room that was named after Ralf Yorque, who was not a person but rather the sound of a neophyte throwing up over the stern railing on an oceanographic vessel. The beauty of irreverence.

I remembered Dale, now in Tasmania, or the Seychelles, or somewhere in the South Pacific, still one of my best friends. And Kathy, who together with her husband Lance had run a lighthouse up on the North coast. And Leonardo, who was from Mexico and who annotated his computer code in Spanish.

And there was Alistair, solver of computer problems and the calmest person I ever met. And Trevor, who was from South Africa and who knew that as a white man he would never get a job in his home country. And Bea, who worked hard for five years to find out that water column perturbations in a lake decrease the number of zooplankton species from 13 to 11, or did the opposite, I can't remember. 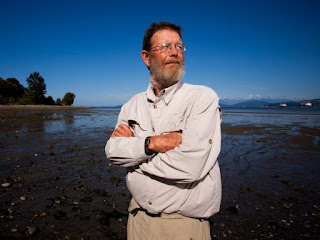 A particular day came to my mind.

I had run into a problem with my research, and because Carl Walters was on my Ph.D. committee, I thought that he would be able to point me in the right direction. As I walked from my office over to the old huts, I tried to gauge whether Carl was in. Smoking inside buildings was prohibited by then, but predictably several times a day you could find Carl standing at the open east-facing window of his office enjoying a cigarette. I didn't see him.

Carl's office was in the north-east corner of the north-eastern hut. He occupied the largest office in the complex, larger than the office of the director of the Fisheries Centre. (The founding director was an unlikeable bloke from England named Tony Pitcher who once offered me a job with the words: "Of course, the expectation is that you work more hours than we are actually paying you for." I declined but thanked him for his generosity.)

Carl was not a believer in an open-door policy, and the best you could hope for was that the door stood ajar, which was rare, and really only happened when he was soon on his way out again. So, it came as no surprise that the door was closed. Standing in the too narrow, badly lit hallway in front of his office, I hesitated.

I leaned forward and listened. Carl's workstation was located close to the door, and I could hear him type. When Carl was busy, Carl was busy. But I needed help, and so reluctantly, I knocked.

Nothing. Nothing, apart from a brief break in the typing. Then the typing resumed.

Should I try again? I waited for half a minute. Even more reluctantly, I knocked again.

I heard a chair slide back, a stumble, some swearing, a couple of footsteps.

The door opened about two fingers wide. I could see Carl's face as he eyed me through the gap.

"Fuck off, Michael," he said without menace, more like a piece of advice.

Then the door shut quietly. Apparently, Carl was busy.

Thinking back, I had to smile. I took it as a badge of honour. If the world's leading population ecologist told you to fuck off, you just did that, you fucked off.

It had been fifteen years since I had last seen Carl. No wait, a couple of years ago I ran into him on 8th Avenue on my way to see my dermatologist.

I recognized him from far away -- the slender figure, the weary walk, the clothes that always seemed one size too big, his steel-rimmed glasses, the beard he always scratched when a problem became too difficult to explain to someone he considered "a clown".

We walked towards each other, and he seemed lost in thought. I hoped he would look up, but he didn't. We were about to pass each other without a word.

He looked up and smiled.

"Michael," he said, putting me at ease. "Of course, I remember you."

"By the way, Michael," he called after me a couple of moments later. "I think you may have been right after all."

He must have sensed my perplexity.

"Your thesis ... I think you may have been right that fish production in the Northeast Pacific is bottom-up controlled after all."

(Imagine a pasture with cows on it. Is the number of cows determined by the amount of grass growing on the pasture or the number of wolves in the surrounding forest? If it is the former, the cows are said to be bottom-up controlled.)

The details are not important. What was important is that the world's leading population ecologist changed his mind and now agreed with my analysis. I had been right to persevere against the strong opinions of the population school. My intellectual battles had not been in vain. Maybe I had it never in me to become a great scientist, but at least I knew that I would have made a decent one.

Unfortunately, it also meant that my fall from grace had not been completely justified, that I could have had a good career, and that the mindless existence as a bureaucrat at a fourth-rate university had not been inevitable.

I smiled. It was too late now. Once they show you the door, they never ask you back in. And that was what was painful.