I still had some time before my meeting and wondered whether Carl was still around. The Fisheries Centre was now housed in a building called the Aquatic Ecosystems Research Laboratory, a new charmless concrete-and-steel block between BioSciences and the Biodiversity Museum.

I found his name on the directory and walked up to the third floor. Room 325 was located at the end of the hallway, but the office was dark. Still through the glass insert I could see that Carl had managed to secure a good office again. Good for him.

As I walked along the gallery to the other side of the building, I looked down at the interior courtyard and into the laboratories across. That's why I spotted Daniel Pauly only at the last moment.

He smiled, but it was obvious he didn't recognize me. I had longish hair now.

"I am Michael Baumann."

When I reached the far end of the gallery, I found that the door there was an emergency exit only. Turning around and passing the offices, Pauly called out to me.

I turned around and stopped in his doorway. Pauly's office was a rather small affair and packed with books. I thought that it really must burn Pauly that even in retirement Carl still held an office that was larger than his and in a better location.

"Whatever became of you, Dr. Baumann?" he asked. He waited for a couple of moments and then gestured towards a chair in front of his desk. "Please, have a seat."

"Not much," I said, sitting down. "I am a bureaucrat now at Podunk University out in the Valley of the Deaf and Dumb."

"There is a university in the Fraser Valley?"

I spread my arms and shrugged my shoulders. "Not really."

We both sat in silence.

Pauly looked as smug as he ever did, his eyes judging me, his mouth sharp, his spectacles dangling from his neck on a little chain, his tall body in a deliberately upright posture. He looked older though, wearier, which was no surprise.

About ten years earlier Pauly, in his mid-fifties then, had suffered a stroke. And shortly after somebody had told me about it, I saw him limping, and badly so, across the square in front of the Student Union Building. I remember thinking that you must never wish your nemeses ill, because decency demands that you do not fight a person who is weakened by anything other than the fight.

Pauly showed no remaining signs of the stroke and was obviously back in fighting form. I was glad for both of us.

He seemed to remember something.

"You know, over the years I have come to realize that I myself am only a footnote in the history of science."

"Okay," I said, unsure where this was going.

He seemed amused by his bon mot.

"Do you still keep up with the literature?" he asked.

"Sure," I said without conviction.

He got up from his chair and began rearranging some boxes, rummaging through some of them. He finally seemed to have found what he was looking for. He turned to me.

He handed me a book titled "5 Easy Pieces", a title undoubtedly chosen in jest.

"It's a book I wrote about my five Nature and Science publications," he said. "That and the professional reactions to them. You will find yourself in Chapter One."

"Thank you," I said, leafing through the book casually. "I will read it later."

Again, there was an awkward silence between us. Luckily, I do enjoy awkward moments and the tension they create.

"You know, Dr. Baumann," he broke the silence. "It's entirely your own fault that nothing ever became of you."

I didn't know whether I was supposed to be offended.

"Well, we all make mistakes," I finally said. "That's just the way life is. I am sure you have made your fair share too. Some mistakes are accidental, of course, and some circumstantial. Few are by choice. And at the time you never know how things will turn out. And you know it could have turned out quite differently. For me. For you."

Pauly didn't say anything, but I don't think he appreciated my philosophy.

"Well," he said, "it was good seeing you after all these years."

He got up from his chair, and so did I, and we shook hands.

He took the book from my hands and put his reading glasses way down his nose, the little chain now dangling from his temples. He handed the book back to me.

The dedication read: To Michael Baumann with my compliments. Vancouver, July 22, 2015. Daniel Pauly. 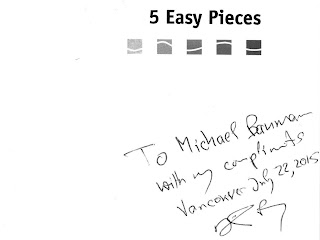 "Thank you," I said, because that is what you do, although I must admit that the "Daniel Pauly" was illegible and may as well have been an abstract "Go to hell".

As I made my way to my meeting, I thought about Pauly. I hadn't seen him in fifteen years, and he still held the grudge against me from the time his Nature paper came out in 1995.

Here was a smart man, a cultured man, a successful academic, and yet he seemed unable to enjoy any of it. He was one of those people who saw his self-worth determined by external validation. I suffered from the exact opposite problem, and so I pitied him. He, a well-regarded full professor at one of the top universities in the world, I, a bureaucrat of no consequence at Podunk University in the Valley of the Deaf and Dumb.

The strange thing is that I actually like Pauly, and I don't think many people do. And of course, he was right: It was all my own fault that nothing ever became of me.

But then he seemed offended when I agreed with him.