The fish that weren't there 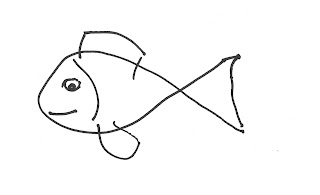 Phoebe was in Grade 3 or 4 at the time, in one of those split classes.

They were a fad back then. Children from two different grade levels were put into the same class, with idea that the younger children would learn from the older ones, and the older ones would learn some social responsibility -- justice, equality, leadership, that kind of thing.

It is a good hypothesis, although I don't know whether it has been properly tested. I also don't know if split classes did not put an additional burden on the shoulders of teachers, even the few good ones. Every teacher already had to deal with a handful of medicated children, a child with autism or Down syndrome, and an ever-changing education assistant. Not to mention some overinvolved parents, often medicated themselves, who considered public education a private service.

That was the reality then. It probably still is.

In any case, Phoebe's class collaborated with a Grade 7 class on a project called Salmonids in the Classroom(1). The idea behind it was that raising salmon in the classroom would teach students a little bit about taking care of living things, a little bit about science, about environmental stewardship, about collaboration, and record keeping, and cleaning, and following instructions. All good.

In late autumn the Department of Fisheries and Oceans had sent a Salmonid kit to Phoebe's school, and in early January the Grade 7ers had set up the tank. This is not as simple as it sounds. It involves covering the bottom with gravel and rocks, installing the aerator and cooler, wrapping insulation around the tank, conditioning the water, a hundred little things.

Shortly after the set-up was completed D.F.O. delivered fifty or so chum salmon eggs. (There is a good reason why it's chum and not coho salmon, but that's not the point of the story.) They were about the size of a pea and orange, and you could see the eyes of the embryo inside. Unfortunately, they had to be kept in the dark.

In late February the alevins hatched from the eggs. They look like little fish already, but they do still have a yolk sack attacked to their bellies. It is their nature to hide between small rocks, which didn't matter much because they still had to be kept in the dark.

By late March, the yolk sacs were completely absorbed, and the little fish swam up to the surface to gulp air into their swim bladders. The swim-up is an exciting phase in the salmon life cycle. That's when the front cover can be removed from the tank, and the children can finally watch them. Free-swimming fry must be fed, and so the children fed them.

Every morning a few Grade 3ers/4ers would walk over to the Grade 7ers and do their share of the work.

One day when I brought Phoebe to school it was Phoebe's turn. And since I had finished my own salmon experiments a year earlier, I asked Trish whether I could accompany Phoebe and her three classmates.

So we walked over to the Grade 7 classroom -- the three girls, Phoebe, Geneva, and Jenny, the boy Jesse, and I. The children knew what to do, and I watched them.

First, they had to record the date. There was a calendar on the wall next to the tank, and Phoebe looked up the date and told everybody what it was. Next the four stuck their heads together to read the thermometer inside the tank. There was a brief discussion after which they entered the water temperature on their sheets. From that they had to calculate what is called Accumulated Thermal Units -- never mind what that is, but they all did it and compared the values, and all of them had done well.

Next they had to determine the pH of the water. Of course, none of them, nor the Grade 7ers for that matter, knew what exactly a pH was, but they had learned how to use pH test strips and how to compare them to the colour chart, and they knew that the pH had to be between 6 and 7.5 or they would have to change the water. And they did it. No water change necessary.

Last they sat down in front of the fish tank and continued their assignment, which was this: In the space below, draw what you see in the tank. So, the three girls and one boy began to draw the little fish swimming in the water column.

Except there was not a single fish in the tank(2).

"What are you doing?" I asked.

"We are drawing fish," Phoebe answered without looking up.

"But you are supposed to draw what you see."

"But there are no fish in the tank."

"Believe me," Phoebe said. "We are supposed to draw little fish, and that's what we are doing."

"Aren't we supposed to draw fish?" Jesse asked me.

Jesse had red hair and white, freckled skin, and he was shorter than the three girls, which leads me to believe that he was in Grade 3. But you never know with boys and girls at that age. From the stories Phoebe had told me about Jesse, I concluded that he was a little bit of a stinker, which immediately made me like him.

"No. Here," I said, pointing my finger at the instructions. "It says you are supposed to draw what you see. Do you see any fish?"

Jesse only shrugged his shoulders.

After ten minutes or so they had finished drawing little fishes, and we returned to the Grade 3/4 classroom. The children handed their assignments to Trish, and that was it.

Except that it wasn't.

I had said goodbye to Phoebe, had abstained from the kiss that would just have embarrassed her, and was waving to Trish on my way out. I noticed Jesse was standing at the teacher's desk.

"You didn't complete your assignment," Trish said in a semi-loud voice.

Jesse said nothing, he just stood there and stared into the floor.

"We have talked about this, Jesse. Remember what I said?"

"Can you please look at me, when I talk to you," Trish admonished him.

"And can you answer me?"

That's when I walked over to Trish and explained that there had been no fish in the tank, and that consequently I had advised them not to draw anything, because after all they were supposed to draw what they saw, and all they could have drawn was an empty fish tank.

"Is that so?" Trish said, although with an undertone.

She looked at the three girls in the back of the room who were staring at her(3).

"I hope that was all right," I added.

Trish smiled and sent Jesse back to his chair.

I waved goodbye and left.

I was walking down Chancellor Boulevard to my office, which was a half-hour walk, and it was a beautiful spring day, and my birthday was just ahead or had just passed. But I was unsettled as I always was when I ran into difficult questions.

(1) http://www.salmonidsintheclassroom.ca/index.html (Accessed: 23 Mar 2017)
(2) Later I learned that the fish had been released two days earlier and nobody had bothered to inform Phoebe's class.
(3) When I wrote this, I realized how much I resent the fact that it was the boy who was disobedient and not one of the girls.