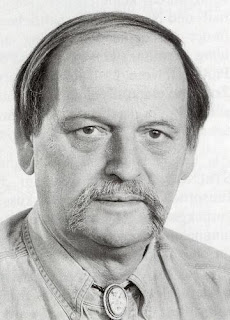 Photo: A serious man, Professor Ott. Which reminds me of General Golz from Hemingway's For Whom the Bell Tolls: "I joke if I want. I am so serious is why I can joke." Source: https://www.zobodat.at/personen.php?id=1199 (Accessed: 20 Jan 2021)

Herr Ott didn't like me, and the reason for that was that I called him Herr Ott.

This may seem strange to non-Austrians, so let me explain.

In 1919 the Austrian Constitutional Assembly passed two important pieces of legislation. One was the Habsburg Law, which dethroned the House of Habsburg-Lorraine and confiscated their property. The second was the Law on the Abolition of Nobility, which, you guessed it, abolished nobility. Austria was to be a true meritocracy. Such was the theory.

The abolition was not much of a concern to the Austrian higher nobility. Yes, they lost their titles and privileges, but they kept their property, social networks, and standing. Or as Princess Fanny von Starhemberg expressed it: "To us, the official abolition is quite irrelevant, because with or without the titles, we will always remain the Starhembergs." Although, it would have been funnier if she had said "the von Starhembergs".

That said, the abolition was a harsh blow for the lower nobility, especially civil servants. They found it degrading and humiliating. They had worked hard earning their noble titles and now all was lost. Consequently, noble titles were quickly replaced by academic titles or professional titles, and one of them was the title of Professor. Austrians were and still are addicted to titles, and the full title of Herr Ott was "Doz. tit. ao. Univ.-Prof. Dr. Joerg Ott", don't ask.

Herr Ott was a child of the hippie generation, and at almost fifty he still wore his hair long, and sported a Fu Manchu, and thought cowboy boots were the proper footwear to go with a suit. His hair was really a wreath surrounding an expanding cue ball and his moustache gave him a look not just of eternal surliness but of erupting anger. That said, Herr Ott surrounded himself with an air of carefreeness, relating stories of political protest, and civil obedience, and sit-ins, from his younger years, and playing guitar, smoking hashish, and listening to recordings of humpback whale songs.

The problem wasn't that Herr Ott saw his students as inferior, any professor of rank would naturally do that. The problem was that he failed to pretend that he didn't. Consequently, no matter how long he had supervised a student, and some of us had seen through their undergraduate and graduate years, they still addressed him, or had to address him, as Professor Ott and used the formal manner of speech, third person plural not first person singular. He on the other hand called us by our first names. To be fair, when he spoke to us, he used the formal manner of speech, which presented itself as a golden compromise.

Still, the inequality bothered me.

That's when I first switched from Professor Ott to Doctor Ott and then, a few months later, to Herr Ott. I knew it was a thorn in his side, or his ears rather, but there was little he could do without looking ridiculous. And so his dislike for me simmered under his Fu Manchu.

As an experiment I did the same to Professor Splechtna and suddenly called him Herr Splechtna. He just laughed it off as one of my idiosyncrasies. Today, my ranking is more complicated, I reserve the title "Doctor" for close friends or for people of whom I think very little.

In any case, it was mid-afternoon when I arrived in Piran, Slovenia.