I turned around and stood face to face with Herr Ott.

"Good morning, Herr Ott," I said as casual as I could muster, and I never was a casual man.

"Are you staying in this room all by yourself?"

From the tone in his voice I could hear that Herr Ott was not pleased, and it appeared to me that his Fu Manchu was drooping sharper than it usually did.

"This room? Yes," I answered. "Nobody wanted it. Why?" I swallowed.

Herr Ott and three other faculty members had arrived late on Sunday evening and consequently had been settled with the only room left, which was the one next to the kitchen. He was annoyed that the caretaker had given no consideration to the illustrious status of faculty members of the University of Vienna, but he was reluctant to boot a group of four out of their room, lest there would be some loss of face. He would have had no compunction, however, to boot me out of the room if he had known, but now it was too late. And he knew that I knew that he knew, which never makes for a comfortable situation.

He didn't say another word but disappeared around the zigzag chicane. I don't mind if other people make mistakes, I find it unacceptable when I do. And I hadn't paid proper attention.

What I didn't know was that I would be displaced about fifteen minutes later.

I poured myself a cup of coffee and a bowl of cornflakes and joined the other students for breakfast on the terrace. Food and drink was self-provided, of course, but somebody was always nice enough to make a big pot of coffee, and it was idyllic to sit outside in the shade of the cliff in the warm morning air and look out west across the ocean towards Italy.

The group of students was equally divided into boys and girls, idiots and geniuses, good people and douchebags, early risers and late risers. Combinations of these groups had a tendency to find each other in the same guestrooms and around tables of four.

Gerold W. and Werner U. waved me over. The two accepted my preference for solitude, and I paid them back with the amusing situations that my irreverence towards Herr Ott produced. Usually we laughed a lot, but after I had been discovered by Herr Ott, I tried to keep it quiet so as to fly under his radar, at least for the day.

(When I wrote to Gerold and Werner about their place in my memoir, Werner reminded me of a story I had completely forgotten. I had always claimed that any good presentation must include the words "hooker", "banging" and "shit". I told them that I feared that Herr Ott would not share my view and that instead of actually saying the words, I would signal the informed student audience when said the words should have come. Werner told me that he never did look elsewhere so deliberately than during my presentation.)

We were talking about nothing in particular when suddenly one of the balcony doors flew open with a crash and everybody on the terrace fell silent. There was giggling from inside the only co-ed guestroom.

Then slowly two hands appeared on the doorframe, then a ruffled head of red hair, and then the hungover, squinting face of Alex B..

Alex was what we call in Austria a Krispindel, a very slim, very tall man. To be sure, he was likeable enough, even though by my standards he was an idiot. (He now is a professor at Old Dominion University.)

Shielding his eyes from the brightness and moving in a grouched position Alex stumbled out onto the terrace. Then when he was sure that he was the centre of attention, he scratched his chest, and bent backward and stretched, thereby revealing a good-sized morning boner contained in a tiny speedo.

When I looked over to the faculty table I was pleased. Herr Ott's mood had just become that much worse. And I had been bumped from the top spot of Herr Ott's shitlist.

Not for long, it turns out.

Her name was Claudia, or Nicole, or Sandra. One of those names that every girl in Austria had then. She walked over to me after lunch.

I didn't like Claudia, or Nicole, or Sandra. She was ditzy, and loud, and an idiot. I also think that she and Alex had something going on, but I am not sure.

The first time I noticed her was in Anatomy lab. The dissection of vertebrates came at the end of the semester -- Fish, Frog, Rat --, and it was Fish week. Claudia had rammed a dissection needle through the body of the fish and into the rubber that formed the bottom of the dissecting pan. Now she was trying to cut the fish open, but the dissection needle had formed an axis, and every time she pushed the scissors up against the fish's belly, the fish was just rotating away.

Professor Splechtna had noticed it from across the room, and I had noticed that he had noticed. It was his habit to walk the aisles between the dissection stations and directly instruct students. As usual he was wearing a suit. He never wore a lab coat, even when demonstrating a difficult dissection, that is a messy one. He was the best anatomist I ever met, Professor Splechtna was. He was also the greatest cynic. Maybe the cutting open of dead things makes you that way. 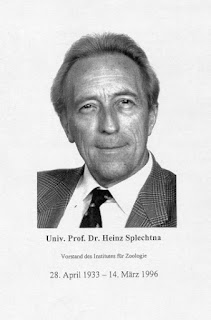 Professor Splechtna walked over to Claudia's station, stopped behind her, and whipped off his glasses to watch her.

"What are you doing?" he asked after a while.

Ahh, you see, I am trying to cut the fish open."

A small crowd of white lab coats was forming.

"Why are you not touching the fish?"

"Ahh, you see, because of the cadaveric poison."

"Ahh, you see, I cut myself this morning." With her left index finger she was pointing at her right index finger. "And I thought that if the cadaveric poison from the fish did get into my wound, that wouldn't be good."

"What are these?" Professor Splechtna asked, pointing at her latex gloves.

"Ahh, you see, these are latex gloves that would protect me against the cadaveric poison."

"I see," he said. He looked into the crowd and raised one eyebrow.

The fish had again spun away from Claudia, and she used not her hands but the scissors to push it back into the standard position -- head to the left, belly to the dissector, tail to the right.

Professor Splechtna made his way through the crowd for a few stations, but then changed his mind and came back to Claudia.

"You know," he said in a voice beyond hope. "You know, one can also go to Law School."

You know, one can also go to Law School.

This will forever be the greatest insult that you can make to a student of Science.

That was a year ago, and Claudia was still here, and not getting smarter. I was told that just the day before, at dinner, she had identified the oesophagus of a fried squid as its chorda. This may be hilarious only to zoologists, I must admit, but it's worse than expecting to see a fish with feathers.

In any case, Claudia walked over to me after lunch and told me that I owed her fifteen schillings.

"Fifteen shillings for what?" I asked.

"For the spaghetti dinner."

"Oh, I guess you weren't there yesterday evening. We decided that we will have a spaghetti dinner on Friday, and I volunteered to get food and wine. And everybody's share is fifteen shillings."

"But I don't want to have a spaghetti dinner."

"But I did the calculation already."

"I understand that, but I still don't want to have spaghetti dinner."

"So, you want to be the only one who is not having spaghetti dinner?"

But that's not the worst. The worst is the extraverts' audacity to think that extraversion is something to aspire to while introversion is not, the idea that an introvert must be converted, pushed out of their comfort zone, encouraged to come out of their shell, shown how to have some fun. And that this massive misconception has become completely acceptable, that is the worst.

(Like so many things in life, introversion is a preference whose origins remain a mystery. It just happens to you. Maybe we should run around trying to change everybody else and force our own preferences onto them. Go for long walks alone. Quietly read a book over lunchtime. Learn to sing the Russian anthem in Russian but never sing it to anyone. Contemplate a difficult problem without telling anybody. We could tell you all this. But we don't.)

And so, they had their spaghetti dinner that Friday evening. And while I had dinner alone at a lovely little restaurant in the area around Piran's marina, Claudia, or Nicole, or Sandra was able to tell Herr Ott what a bastard I was.

And there was still a week to go.