The vicious beating of Bernhard Ö. 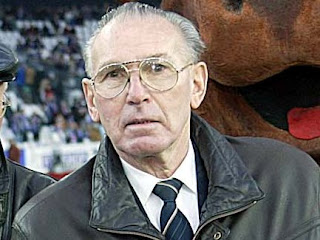 I had tried to distract myself during our ten o'clock break by joining a small group of boys that had gathered Hofer's desk. Hofer was showing us playing cards he had brought from home, playing cards with naked women on them. I also watched the Melcher cousins and Servi.

The Melcher cousins had stuffed Servi into the garbage bin that stood between the two cupboards in the back of the classroom. They had folded him up at the hips and pushed him in deep, bottom first, until only Servi's head, arms and calves were above the rim. Then they put the rubbish bin back.

Servi was trying to get loose, of course, and after a while of rocking back and forth between the cupboards he managed to tumble the rubbish bin over but was still stuck in it. So he crawled around the floor like a hermit crab for a couple of minutes. Nobody helped him.

But I wasn't really paying attention, neither to the naked women nor to Servi's troubles, just waiting for the bell to ring, and now it was finally time. Quickly I made my way to my desk. I thought that the classroom was falling quiet faster than usual.

Nervously we stood behind our chairs waiting for Fachlehrer Feldinger to arrive. Ö. was looking out the window, Manuela and Andrea were whispering, then giggling, probably about Hofer's dirty playing cards, and Bauer, the class leader, gave me an encouraging smile. He had good reason to smile. For the rest of us there was only hope, hope that Fachlehrer Feldinger hadn't graded the exam yet.

In all objectivity, stenography was a stupid subject. First of all, few of us had plans to become secretaries, and certainly none of us boys. Second, using the cumbersome shorthand symbols required a lot of practice and even the fastest of us were faster writing longhand. And last, you had to translate the record back into longhand, an activity conceptually not different from digging a hole and filling it. But since the latent goal of education is obedience, maybe digging and filling holes served its purpose.

We could rationalize it all in our heads as much as we wanted, none of us would ever dare to speak the truth, even to each other.

I still don't know which was worse, stenography class or P.E..

If you had forgotten your gym clothes at home, Fachlehrer Feldinger made you participate in your underwear. Few of us ever were unlucky enough, and for that very reason, but I remember both Servi and Ristic running laps in the gym in their fluttering white underpants, and us laughing, and Fachlehrer Feldinger gloating.

If you were noisy in the change room, which really was just a couple of coat hooks along the wall of the basement hallway, you were put before a firing squad. I remember Servi squatting at one end of the gym, his face to the wall, his back to us at the other end, and Fachlehrer Feldinger ordering us to shoot footballs at him as hard as we could. And we did.

As I said, I didn't know which was worse, stenography class or P.E..

We quickly sat down and moved our chairs so that they were properly positioned in relation to the desk. I put my arms in front of me. It was a gesture of submission.

Fachlehrer Feldinger folded his hands behind his back as was his habit. Eyes lowered on the floor he began walking up and down in front of the class. He spoke in the low soft voice we feared so much.

Every once in a while, he stopped and looked into the classroom. Like stone we sat, eyes on the back of the pupil in front of us. None of us made a sound. He turned and began pacing again.

When he stopped his restless walk at the window and looked out in the quiet spring morning, we all looked out. It was a sunny day in early spring. There was little snow left on the mountains and the river that ran by our school was grey with melt water. A beautiful day.

It was Fachlehrer Feldinger's practice to sort the exam booklets in such a way so that the worst exam would be on top. It was also Fachlehrer Feldinger's practice to let the weakest pupil redo the whole exam on the blackboard, the correction as it was called. Starke sitting next to the teacher's desk turned around and tried to catch Ö.'s attention in the last row. He nodded at Ö., and Ö. acknowledged the signal.

Fachlehrer Felding drew four horizontal lines across the blackboard, the stenography lines, the bottom one thicker. "Ö.!" he shouted. He spun around quickly with a malicious smile on his face.

"Ö., would you do us the honour to do the correction on the blackboard?"

Ö. was stocky and had a habit of sitting on one leg. He was slow to get up.

"Come, come, Ö.." There was impatience in these words. "You wouldn't want your classmates to wait for your insights into the matter of stenography, would you?"

Ö. never wore the mandatory leather slippers that we all hated, and we all wore, boys in black, girls in red. Instead he was in stocking feet, beige socks with worn elastics.

"I forgot them at home."

"Pardon me, Ö., I didn't hear you." Affectedly Fachlehrer Feldinger put his hand behind his ear.

"I forgot them at home, Herr Fachlehrer." Fachlehrer being the proper submissive form of address of a subject teacher.

"At home." He turned to us. "Anybody else forgot his slippers at home."

Nobody raised their arm. My palms were wet now. I folded my arms before me.

Fachlehrer Feldinger walked over to the desk and picked up Ö.'s exam booklet. He opened it, shook his head, closed it again, and holding on to it put his hands behind his back again. He walked up to Ö.. Ö. took a few steps back and stood in attention next to the blackboard. Embarrassed he picked up a piece of chalk.

Starke leaned forward again looking at the exam booklet of the second worst pupil. He turned around and nodded at me. I felt an urge to pee.

"Now, Ö., will you write for us the sentence: You must complete your work immediately."

Ö. hesitated for a second then started to write on the predrawn lines.

Ö. looked at the shorthand he had just written.

We all shook our heads, although I didn't know whether it was correct or not. Nor did I understand why the weakest student would suddenly know the correct shorthand forms when he clearly hadn't known them two days earlier.

I saw that behind his back Fachlehrer Feldinger switched the exam booklet to his left hand.

Fachlehrer Feldinger's arm swung fast. Ö. tried to duck but was hit and thrown against the blackboard.

For a couple of seconds there was complete silence. Then Ö. lifted himself back up, bent down to pick up the chalk from the floor, stood to attention again. From my seat in the third row I could see the white marks that Fachlehrer Feldinger's fingers had left in Ö.'s red, tear-smudged face.

Fachlehrer Feldinger's jumped to his feet. "What did you just say?"

Fachlehrer Feldinger's flat hand rose with unbearable slowness. Then it came down swiftly and hard onto Ö.'s face.

I quickly shut my eyes, but I couldn't escape the smacking sound. I dared to blink, look elsewhere, but I didn't dare to hold my ears shut.

There was nothing improper in Ö.'s pronouncements, neither in word nor intonation nor loudness. Fachlehrer Feldinger did not understand that the escalation he brought forth was an acknowledgement of his own wrongdoing. What he did understand was the mockery that lay in Ö.'s response. Fachlehrer Feldinger knew, Ö. knew, we all knew: Nobody could be allowed to affront authority. Ö. had to be broken.

Another thud, followed by a low rumble, which was the sound of the blackboard moving down.

I looked up and saw Ö.'s body on the floor, Fachlehrer Feldinger hovering above him, his face red, his hand whisking back a strand of hair which the force of his strikes had separated.

Slowly, he got up, the blood drained from his face, so white that I couldn't even see the finger marks any longer. Nobody dared to breathe much less to move or say a word.

Why doesn't somebody say something?! Anybody! Anything! Our fear made us silent, and our silence made us accomplices.

Fachlehrer Feldinger returned to his chair and sat down. "Now, Ö., should we try again?"

"I am waiting, Ö.. The whole class is waiting for you." Fachlehrer Feldinger looked up at us. "Aren't you?"

From my place I could see Fachlehrer Feldinger in profile. With his combed back hair he reminded me of a vulture waiting for his prey to die. He was enjoying himself. He pointed to the floor.

Ö.'s trembling hand moved up the blackboard and began to write.

We could, but still we shook our heads.

Speaking louder this time, Ö. began to write on the blackboard in the archaic symbols that were stenography: "Practice ... makes ... perfect."

"Hold it right there."

None of us dared to say a word.

And then to Ö. again: "So he does know how to do it right, after all."

There was a long silence.

"Go and sit down." Fachlehrer Feldinger said in a very controlled voice now. "I hope that's enough nonsense from you today. Unless you want to continue this in the gym."

"Good. Now, let's give somebody else a chance at the correction, shall we? Next one to the blackboard ..."

I felt hot urine run down my front.