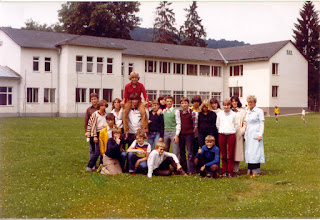 Class had already started, and I was late and running down the hallway of my shitty day boarding school. That's when I saw Manuela come out of the classroom. I slowed down to a casual walk.

The thing was, I was in love with Manuela.

"Hi Manuela." I said, saluting as she wordlessly walked by.

She didn't even look at me. I shrugged my shoulders and continued on. Rejection is something boys get used to early in their lives. I had almost reached the corner to the next hallway when I heard her call out to me. I stopped and turned around. She came walking back.

"I hear you want to go steady with me, Baumann," she said.

I blushed. I didn't know who had told her, probably Bauer.

"Is it true?" she asked, her arms akimbo.

Should I confess? Should I deny? But then Manuela and I were alone for the first time, and it was her who had chosen to talk to me. There was hope.

I was waiting for something magical to happen.

"Well, stop telling people. It is not going to happen."

"Why? Because you are too immature for me." She turned and walked away.

I was stunned for a second.

"What d'you mean too immature?" I yelled after her. "We are the same age."

"Be quiet." she said, coming back. "See how immature you are? Besides, you don't even know what the period is?"

After finishing middle school I never ran into Manuela until 1993. It happened at a deli counter in a grocery store. I had ordered a sandwich and Manuela was cutting my meat, which is not meant sexually. We both pretended not to recognize each other. It was sad, really.

Sadder still, I had just finished my M.Sc., and Manuela had been so much better in school than I ever was. I should have been the one to cut her meat. Which again is not meant sexually.