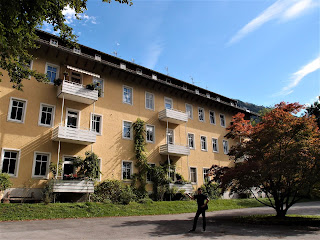 Not that anybody called it the Yellow House, then or later, not the adults who lived there, not we children. Nor was the colour of the house really yellow. A better writer may have called it humble-gold or Jersey-cream, at least the four-storey main wing. And the one-storey eastern annex that used to house the water cures was not yellow at all. It was brick-red.

The Yellow House is gone now. It once stood in the district of Parsch, in the city of Salzburg, on a plateau on one of the foothills of the Gaisberg. The foothill was called Judenberg, or Jew Mountain. 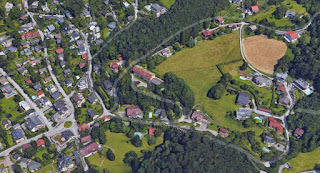 Image: Satellite image of the Yellow House, in the centre. Source: Google Maps (2017)

When I was a child a green mesh wire fence ran along the northern edge of the property. The fence had a hole in it, and the hole was big enough for us children to slip through onto the meadow on the other side. I don't know how the hole came to be, but over the years, as we grew taller, the hole grew bigger, until one day somebody fixed it. From then on when we wanted to get onto the meadow, we had to climb over the fence.

Naturally climbing the fence was forbidden.

The meadow beyond the fence rose gently at first, even allowing for some swampy patches on the western side. But as you walked uphill the ground became steeper, until at the highest and steepest point a rough white building marked the point where the forest began.

The rough white building was a guesthouse named Sonnleitn. The food there was plain, and the rooms were rustic. Or so we had heard. But the restaurant had a large terrace and a splendid view over the city, and this attracted a good number of guests especially when the weather was good. It was here that my parents met for the first time on the evening of the day President Kennedy was assassinated. My father was a thirty-three year-old travelling salesman, my mother was still a child half his age.

I always thought that the meadow would have made a great pasture, but no hoof ever touched the grass here. Instead every year one sunny day in the late summer the farmer would appear with his tractor and mow the high grass that had grown since early spring. On the following day he would bring his tedder, turning the grass to dry. He would come again the following day, and then at least one more time, every time wreaking havoc on my eyes and nose. Such is the fate of a child cursed with hay fever.

For a couple of winters the owners of the Sonnleitn operated a ski lift on the eastern side of the slope. The run was easy and ideal for beginners. They left the cableway standing all year so that they could take advantage of the erratic first and last snows. Sometimes in the summer we children would line up and pull hard on the heavy cable until it began to move slowly around the pulleys. It was forbidden, of course.

By the mid-1970s the winters had become too mild, or the locals too skilled skiers, or both, and that was it. First the cable went, then the pulleys, and in the end all that remained was the small wooden hut at the bottom of the hill, where we used to buy our tickets. Growth and decline in just a few years.

East of the Yellow House, next to the brick-red annex, was a small field for us children to play. There was a swing too, not a real swing, just a fat rope that some soldier had tied around a high horizontal branch of a tall birch tree. It didn't have a seating board either, just a large knot at the end, which made for an uncomfortable seat or a lousy footstep.

Not far from the swing was a sandbox with wide boards all around the top of the frame. It held moist yellow sand which was good to build castles and marble runs. We piled the sand high in the centre and shaped channels and chutes, and bridges and tunnels.

Wolfgang once peed into the sandbox.

It was a warm summer morning, and Wolfgang, Manfred, and I were sitting around the sandbox chatting, and suddenly Wolfgang got up, and walked over to the corner of the sandbox, and pulled out his wiener, and started to pee.

Manfred told him to stop or else. But he didn't stop, mocked us instead, and we went to his home, and rang the bell.

Frau Riedl opened the door and told us that Wolfgang was already out.

"We know," we said. "The reason we are here is that we really didn't want to say anything but ..."

"But Wolfgang just peed in the sandbox."

They lived on the ground floor, the Riedls did, and when we turned we saw Wolfgang's chipmunk cheeks pressed flat against the frosted glass pane next to the entrance door. He couldn't see us, and he couldn't see his mother as she came after him. She didn't hit him or even only yell at him, which I fear both Manfred and I had secretly hoped. She just pointed towards the door to their apartment. Maybe he got a good thrashing inside. In any case, we didn't see Wolfgang for the rest of the day.

Wolfgang was five years old then. As far as I know, he never peed in the sandbox again.

Beyond the sandbox a trail led down into a small wood. A minute down you reached the tree castle. We called it the tree castle but the name was an exaggeration even then. It was just a battered old hazelnut tree with strangely grown branches that allowed us children an easy climb. It had good perches too, and at every height.

At the centre of the car park was a rondeau. In the heydays of the Yellow House the rondeau used to be a fountain, installed to delight the patients. After the war it was filled with soil, and ornamental rose bushes were planted around its perimeter. And years later Herr Arnold even got rid of those embellishments and planted a single red maple tree in the centre.

Chestnut trees framed the car park to the south, as did two very tall larch trees which during thunderstorms swung terribly in the wind. 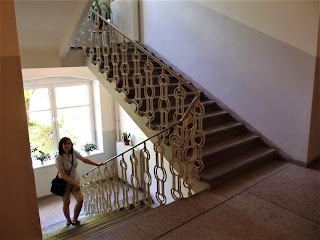 The stairs were grey and hard. They connected hallways that were bare, except for the plants that Frau Arnold kept in the windows. These are the stairs we ran up and down as children, jumping the last two, four, five, depending on our age. They seemed huge to us. These are the stairs that women and men, mothers and fathers climbed. They don't look like much, but they were good stairs.